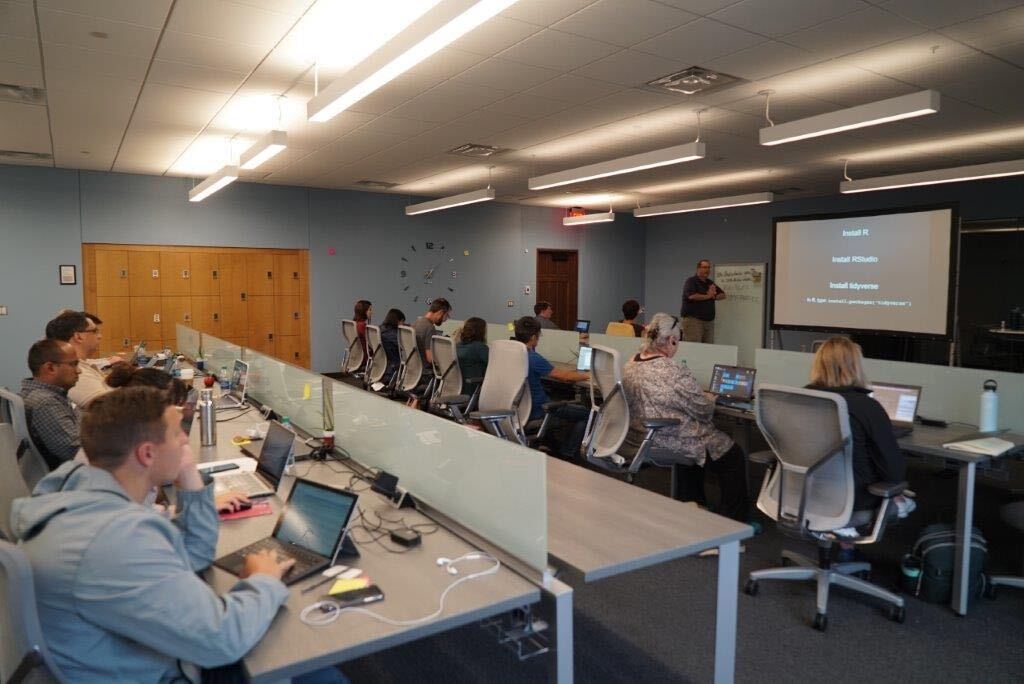 Today, big data is more important than ever. With the increased accuracy that can come from analyzing large data sets, researchers are able to utilize supercomputing to analyze data quickly, much faster than a human (or teams of humans) could. These complex data sets can be used to interpret everything from atmospheric data to astronomical discoveries.

That’s why during Summer 2019, three data carpentry workshops were held by the Midwest Big Data Innovation Hub (MBDH) at institutions across the midwestern United States. The MBDH, which is headquartered at the National Center for Supercomputing Applications (NCSA) worked alongside The Carpentries to organize workshops spanning a variety of disciplines and domains.

One of four regional Big Data Hubs in the country funded by the National Science Foundation,MBDH covers a twelve state area. The Hub is aimed at addressing challenges in collecting, managing, serving, mining, and analyzing rapidly growing and increasingly complex data.

“In Phase 1 of the Midwest Big Data Hub, the University of North Dakota team managed the Data Carpentry membership for the Hub and hosted 6 Hub-sponsored workshops across the Midwest: two in Ohio, one in Minnesota, one in Missouri, one in South Dakota, and one on the Turtle Mountain Reservation in North Dakota,” said Aaron Bergstrom, MBDH coordinator for the Data Carpentry workshops.

Now in its second phase of operations, the Hub’s focus continues to be bringing together people through data science, as well as building capacity in data science across disciplines, and these workshops are aimed towards both missions. With the help of The Carpentries, a non-profit organization which provides workshops and training opportunities, the Hub is able to achieve these missions.

The partnership with the Data Carpentries is critical to the Midwest Big Data Hub’s mission to facilitate education around data region wide. We are incredibly thankful to The Carpentries for their engaging curriculum and teaching; and to Aaron Bergstrom at the University of North Dakota for leading this successful partnership in the first phase of the Hub.

The first of last summer’s workshops was held on the reservation lands of the Turtle Mountain Band of Chippewa Indians (TMBCI) in Belcourt, N.D., in partnership with the University of North Dakota. The goals of this workshop were to learn from and collaborate with tribal nations how best to utilize data for their needs and to expand access to data, regardless of location. Almost all of the attendees for this workshop were from underserved groups, including regional tribal stakeholders such as tribal government, non-profit, academic and health care positions.

The second workshop, held in early August in Cleveland, Ohio, was an opportunity to leverage the Hub’s partnerships with the non-profit US Ignite and their Smart Gigabit Communities (SGC) program. In these SGCs, broadband connections and associated smart applications are established to help a network of nationwide communities address smart city challenges.

The workshop itself was coordinated by the Case Western Reserve University Center on Urban Poverty and Community Development, and hosted at a tech business incubator, contributed by local non-profit organization DigitalC. The goal of these initial workshops was to gauge success expanding to community partners in non-academic areas, such as non-profits organizations, startups, and local government, and found that most of the attendees of the Cleveland workshop were involved in these areas of work.

The final summer workshop was held at the Translational Data Analytics Institute (TDAI) at Ohio State University. This workshop sought to align with TDAI’s educational and research mission in hopes of illuminating the ways that data can help produce insights from teaching material, which seemed to be a success.

“The sponsorship of the Data Carpentry session by MBDH was really key in a couple of ways,” said Steve Chang, a technology solutions engineer at OSU. “First of all, it allowed us to hold a workshop that would otherwise have taken a lot more effort to coordinate in terms of finding willing instructors on our own campus and developing or finding teaching material. Secondly, it opened our eyes to the needs on our campus for such training.”

With the help of The Carpentries, the MBDH is planning more workshops to help expand data science education across the Midwest region. “The upcoming programs will be an exciting opportunity to further disseminate fundamental skills and good practices for working with data,” said Delage.

Learn more about MBDH, including upcoming workshops, on their website.

Explore the Hub at http://MidwestBigDataHub.org

Learn more about the BD Hubs ecosystem at http://BigDataHubs.org

The MBDH project office is housed at the National Center for Supercomputing Applications (NCSA), which provides computing, data, networking, and visualization resources and expertise that help scientists and engineers across the country better understand and improve our world. NCSA is an interdisciplinary hub and is engaged in research and education collaborations with colleagues and students across the campus of the University of Illinois at Urbana-Champaign.