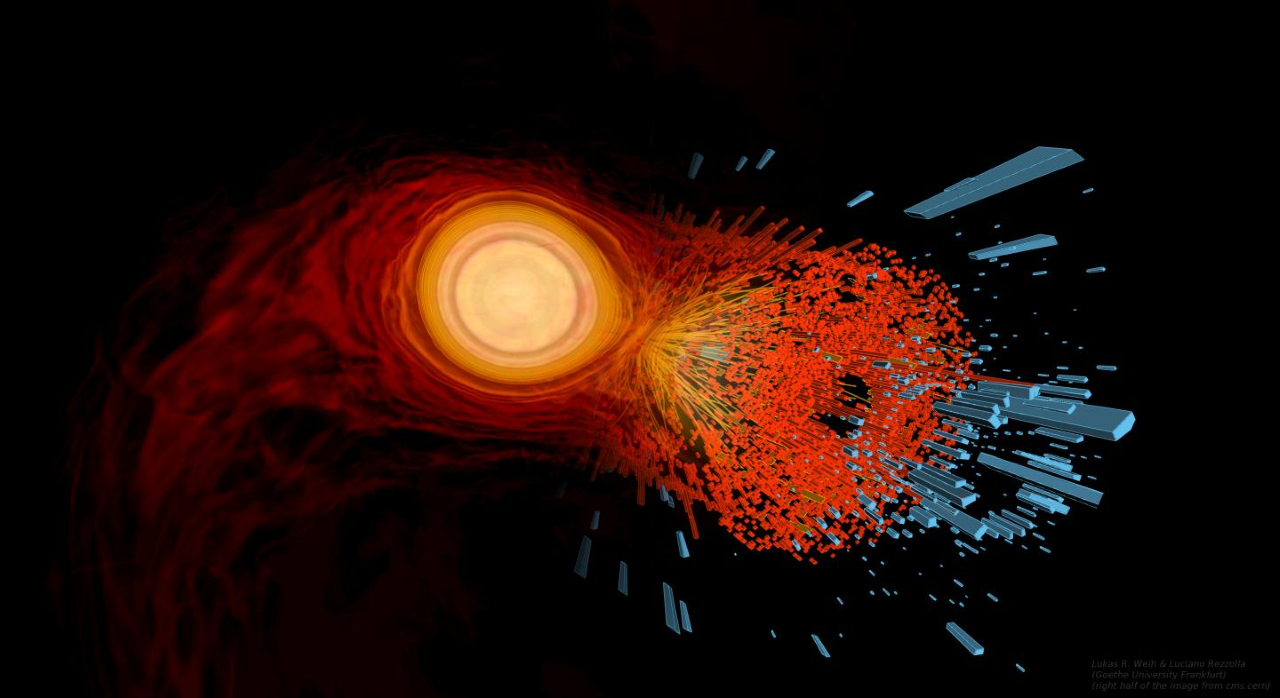 A computer simulation of two merging neutron stars (left) is blended with an image of heavy-ion collisions at CERN. (Credit: Lukas R Weih and Luciano Rezzolla/Goethe University Frankfurt and CMS/CERN)

A nation-wide team made up of researchers from the University of Illinois at Urbana-Champaign, the University of Houston, and Kent State University has been awarded $4.4 million to establish the Modular Unified Solver of the Equation of State (MUSES), a project that will seek to construct cyberinfrastructure for astronomical study moving forward, enabling new astrophysical research.

Joining the collaboration, the National Center for Supercomputing Applications (NCSA) at Illinois will be responsible for the front-end development and programming for any cyberinfrastructure, led by Senior Research Scientists Roland Haas and T. Andrew Manning. MUSES, which is funded by the National Science Foundation, will combine expertise across disciplines to build the foundation for astronomy research at the University of Illinois and beyond, allowing researchers to share work and solve physics problems quickly and efficiently.

Once established, the MUSES cyberinfrastructure will allow scientists to construct Equations of State (EoSs) in real-time, which can unlock a variety of astronomical insights. Research teams across the world will be able to engage and leverage models and tailor EoSs to their personal research needs, allowing for a swift exchange of information that has previously not been possible.

Read more from the Illinois Center for Advanced Studies of the Universe here:

Three Illinois Physics and Illinois Center for Advanced Studies of the Universe (ICASU) professors lead a team of researchers who recently received a $4.4 million grant from the Office of Cyberinfrastructure for Sustained Scientific Innovation (CSSI) of the National Science Foundation (NSF). The project is called Modular Unified Solver of the Equation of State, or MUSES, and it will provide scientists with an open-source cyberinfrastructure that can be used to generate equations of state (EoS).

MUSES is a collaboration between multiple institutions, with principal investigators at the University of Illinois Urbana-Champaign (UIUC), The University of Houston, and Kent State University. The objective for this collaboration is to develop a new cyberinfrastructure that will provide novel tools for answering interdisciplinary questions in nuclear physics, gravitational wave astrophysics, and heavy-ion physics. Such questions include: What exists within the core of a neutron star? What temperatures are reached when two neutron stars collide? What can nuclear experiments with heavy-ion collisions teach us about the strongest force in nature?

The MUSES collaboration comprises an interdisciplinary team of researchers specializing in lattice quantum chromodynamics (QCD), nuclear physics, gravity, relativistic hydrodynamics, and computer science from at least 16 institutions. All of the programming and front-end development will be done at the National Center for Supercomputing Applications (NCSA) at UIUC.