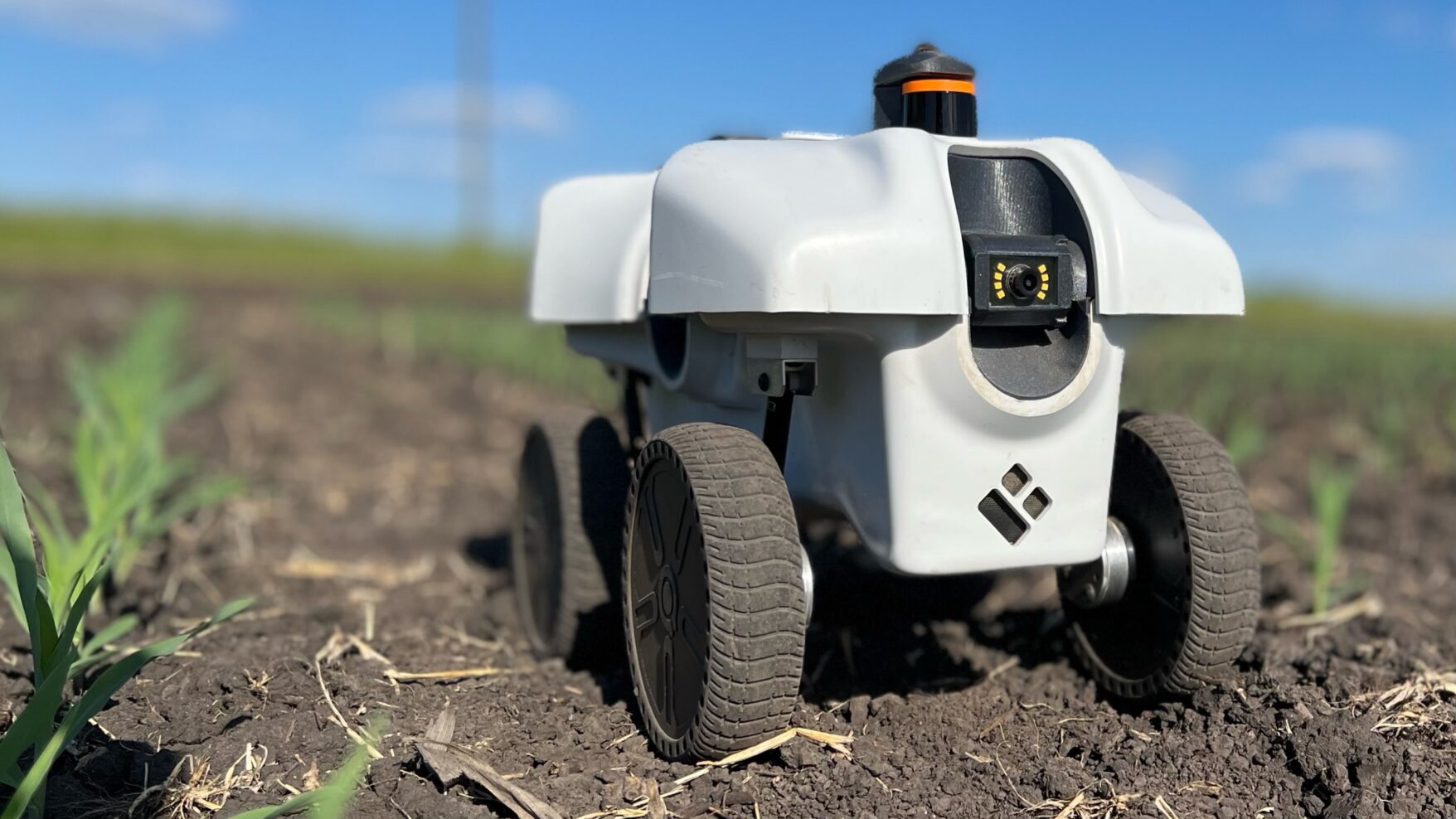 For US farmers, enormous GPS-guided equipment makes easier work of planting and harvesting thousands of acres each season. Now, thanks to a partnership between UIUC’s Center for Digital Agriculture,  a collaboration among the College of ACES, Grainger College of Engineering and NCSA, and robotics start-up EarthSense, some of the work is being assigned to machines of a much smaller scale.

EarthSense CEO Chinmay Soman came to the University of Illinois Urbana-Champaign as a postdoctoral student to look at agricultural sustainability through the lens of soil health. “UIUC has the best Ag research, but we also have the best engineering and computer science,” he said. Meanwhile, friend and colleague Girish Chowdhary, Ph.D. and Associate Professor in Agricultural and Biological Engineering at UIUC, has been focused on AI and robotics and is also chief scientist of the Illinois Autonomous Farm (IAF). The two saw an opportunity to collaborate, and the idea for EarthSense germinated.

In addition to his work with IAF, Chowdhary also teaches robotics at the university. However, building a robot in a lab is a far cry from putting a manufacturing process in place. He noted having industrial partnerships, such as with EarthSense, are key to bringing great ideas to life. “What having plug-and-play PCs did for computer science is similar to what it means to have access to EarthSense robots,” he said. Because when robots can be made in bulk, it makes a world of difference in bug-fixing, software development, and a range of product testing that’s unavailable in one-off robot-build projects.

EarthSense is a sort of UIUC spinoff, a robotics and AI startup. We focus on making AI tech more productive, more focused and more sustainable. We are targeted at solving very specific problems and collecting actionable data.

EarthSense has two main robots with prospects for a third, each tailored to handle different challenges. The first success is the TerraSentia, tested on the IAF after that site was established in 2020.

EarthSense now has over 100 of these rugged little bots. TerraSentia’s job is phenotyping and collecting data. Its compact size allows it to skim carefully between rows, identifying and recording the crops as it passes. Its advanced sensors and complex AI enable navigation over bumps and irregularities in the soil without the need for GPS tracking. This data is vital for agricultural companies developing seed, fertilizers and pesticides. To date, TerraSentias have scanned over 100,000 plots.

EarthSense’s small cover crop robot, also tested at IAF, can get under the canopy of the existing crop and plant seeds before harvest, providing the crop with an additional month or two to grow before winter. They can work alone or in tandem, meaning their use is scalable, from small farms to much larger operations. With over seven currently in use and another 10 on the way, EarthSense’s cover crop robot has planted several hundred acres already and will do another thousand by year-end.

CDA’s partnership with EarthSense is just one example of how the collaboration between academia and industry can be particularly successful.

Collaborations with startups and other small companies in the digital ag space allow us to stay abreast of innovations, support economic development in our region and state, and continue to align academic research with applied challenges. In many cases, startups like EarthSense allow the connection between Illinois faculty and alumni to continue directly, as both founders attended and finished their education at Illinois.

He expects over the next three to five years, “more data processed by more powerful machines with advanced AI algorithms is likely to move the needle aggressively forward, as it has, in areas like automation, livestock, crop sciences – every aspect that incorporates digital and agriculture together.”

Being at the nexus of agricultural technology is great for startups and students as well. The ability to teach agricultural and robotics students on the ground a mere mile from campus at the Illinois Autonomous Farm testbed provides meaningful research experiences for all. “The fact that the work gets done here in Illinois exposes students to cutting-edge research,”  said Chowdhary. And industrial partners benefit from working with the next generation of leaders in agriculture and technology.