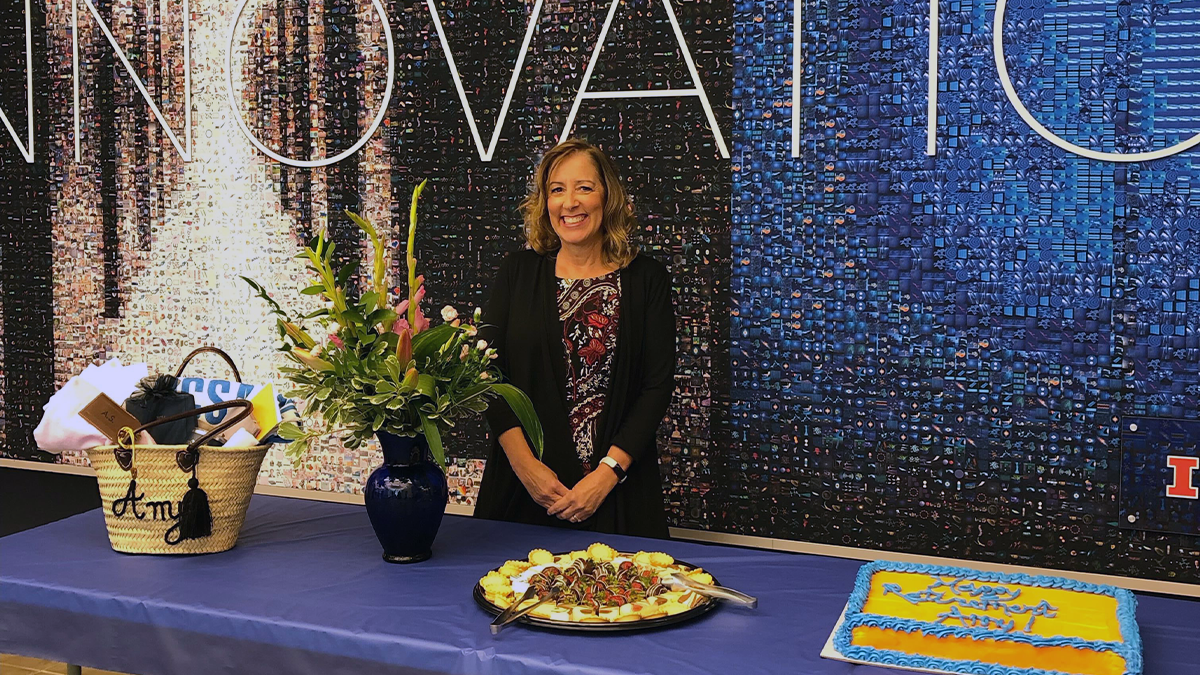 Amy Schuele at her retirement celebration at NCSA on July 26, 2022.

Amy Schuele, associate director of integrated cyberinfrastructure, will be retiring after 31 years at NCSA. Like any good retiree, Schuele’s departure is both well-earned on her part and will be a big readjustment to the many people who rely on her unique skills.

Interestingly enough, Schuele both began and ended her career at the University of Illinois Urbana-Champaign. She grew up in St. Joseph, which is where she lives now, and would go on to receive a coveted degree in math and computer science from the university.

After spending time in Seattle at Boeing, she moved back to Illinois in 1991. In fact, her time in Seattle is what brought her back to her home state, as a conference in Washington introduced her to some members of NCSA who would interview her for a new job.

“NCSA seemed like a bit of a pipe dream for me at the time,” says Schuele. “It was like that moonshot resume that you send out. I guess I really clicked with the people I met in Seattle, and the job has been a fabulous fit ever since.”

One of the reasons the fit was so fabulous, according to Schuele, is that NCSA gave her the flexibility she needed to live her life. Schuele points out that she was part-time for more than 20 years in a variety of different appointments as she was raising her family.

“I’m just so grateful that NCSA let me raise my family,” says Schuele. “And at the time that my children were a little more grown up, a little more self-sufficient, I was able to step into that leadership track seamlessly. And they welcomed me! They didn’t hold back because I hadn’t been a full-time employee for all those years.”

Schuele would go on to spend 31 years at NCSA. That’s a long time to spend in any field, but it’s especially impressive within such a technologically focused organization. NCSA is on the cutting-edge of computing and staying relevant and knowledgeable can be a challenge.

To keep on top of it all, Schuele had to learn how to bend.

“We have to be extremely flexible,” says Schuele. “We can start on a project, and we think that it’s going to go from A to B. But by the time we’re finishing it, it went from A all the way through B and probably down to L, M or N. I’ve learned to be really flexible.”

While having to be constantly mindful of changing technologies is certainly a challenge, Schuele finds a lot of joy in her job. Specifically, she points to her work on XSEDE and its development of the XRAS (XSEDE Resource Allocation Service)  as the single most impactful project she’s worked on. However, specific projects aren’t what speak to her the most. Her favorite times at NCSA were the moments that made her realize just how important a “small” task can be.

Everything that we do at NCSA, even if it seems like a tiny bit of the work, impacts the future of where society is going, certainly where the university is going.

Of course, it would be a wasted opportunity to allow Schuele to retire without asking her opinion on what makes for a successful career. Flexibility is obviously important to her, but that’s really just the beginning. When asked what she would say to someone early in their career, Schuele had some simple but effective advice to extol.

“Be open, be willing to do whatever is needed to advance the project or the work that you’re doing,” says Schuele. “I don’t think we have the opportunity to put up our hands and say, ‘not my job.’ That’s not going to be successful. We all need to work together.”

Of course, something that Schuele regularly thinks on is diversity and inclusion within tech fields. As a woman in tech – especially as a woman who’s been in the game for decades – Schuele understands the unnecessary barriers erected in front of the female half of the population in terms of being productive members of the tech community.

That said, as she reflects on her time at NCSA and her hopes for the future, Schuele is anything but pessimistic. In fact, she seems to believe we’re on the precipice of something truly great – we just have to get there first.

“There were definitely challenges and there are still challenges in being a woman in tech,” says Schuele. “NSCA has done a pretty good job navigating this, but it’s not something that we can drop. It’s something we absolutely need to be aware of each and every day. Every meeting we attend, every conversation we have, we need to make sure that we’re hearing all those diverse voices, because that’s how we’re going to get to the solutions that we’re striving to build.”

It’s comforting to hear someone with so much experience in the field give an optimistic view of the future.

“The tech world is learning, but it’s taking baby steps,” says Schuele. “But gosh, if someone could come along who could ignite that fire and really move it along, that would be tremendous!”