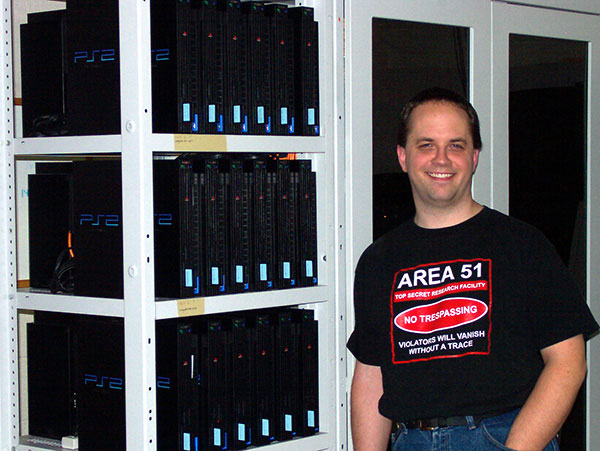 When Sony released its PlayStation® 2 (PS2) game console in 2000, demand far outstripped supply, with eager gamers and desperate parents bidding up to $1,000 on eBay for scarce units.

When Sony later released the Linux Kit for the PS2, interest in the machines spread beyond the gaming community to a seemingly unlikely place: the National Center for Supercomputing Applications (NCSA).

Researchers at NCSA theorized that because of the unique processor of the PS2—with its two powerful vector units designed to manipulate polygons for game displays—a cluster of the consoles could potentially be used for scientific computation.

The Sony Linux Kit enables such a dramatic repurposing. The kit gives programmers direct access to the processor’s vector units and provides a working and development environment that contains the tools found on more traditional Linux systems. This allows the units to be used for nongraphic, computationally intensive tasks.

NCSA’s researchers now have 70 PS2 consoles running as a cluster using an Ethernet network. Some of the tools commonly found on more traditional high-performance computing clusters have been integrated into the system, including the Message Passing Interface (MPI), which allows the individual consoles to communicate with each other and execute application across all of the machines simultaneously, and the Portable Batch System (PBS) and Maui Scheduler, which manage jobs on cluster systems.

“This is literally a hand-made supercomputer assembled by a creative group of researchers who are constantly pushing the limits of our field,” said Dan Reed, director of NCSA. “Many people have talked about the possibilities of the PlayStation’s graphic processors, but to our knowledge, no one else has attempted to make these machines perform as a large, integrated Linux cluster. We have shown it is possible, and the long-term result could be another low-cost computing alternative for the scientific community.”

The goal of the PS2 project is to explore the use of inexpensive hardware for high-speed computing. It is driven by the realization that market economics are driving dramatic increases in commodity graphics systems, both in game platforms and in PC graphics cards. These systems are, for certain applications, faster and cheaper than today’s microprocessors.

Read The New York Times article on the PS2 cluster.