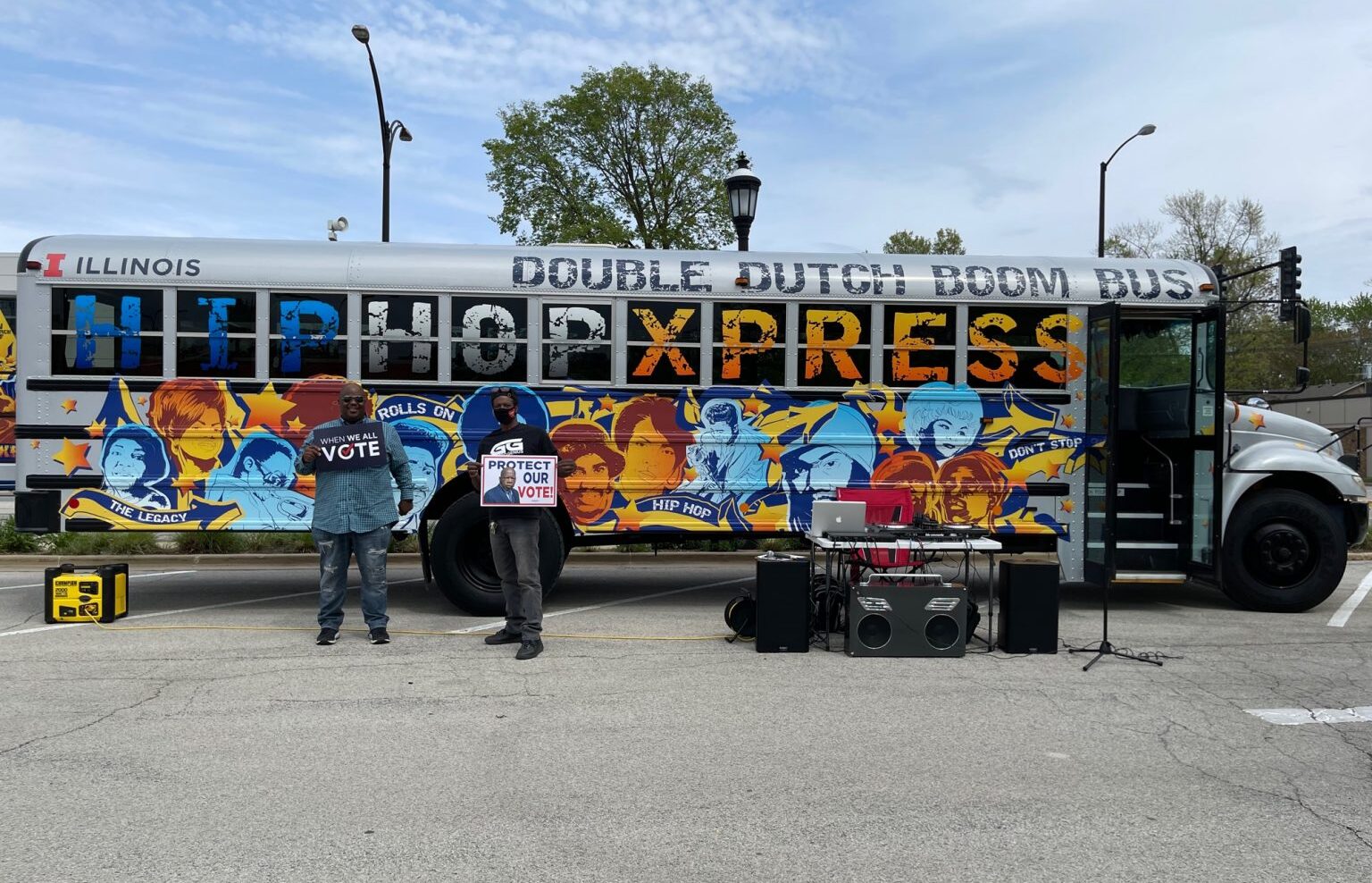 William Patterson, PhD, a 2020–21 Fiddler Innovation Faculty Fellow, has seen the faces of children in Urbana’s Black communities light up with curiosity as the Hip Hop Xpress rolls onto the block. He’s seen that anticipation turn to wonder as the team takes out remote-control cars and drones and starts an impromptu race down driveways at 40+ mph. And then he hits them with science. Inside the Hip Hop Xpress is a full workshop, DJ station, multiple laptops and sound recording studio. For Patterson, it’s all about that access point. “Dazzle them,” he says. “Then you can show them the really cool STEM and STEAM concepts.” Engineering is unleashed everywhere, including hip-hop culture.

Illinois School of Music, of which Patterson is a clinical associate professor, states that his research focuses on preparing students of various Hip Hop generations to be civic-minded global leaders in cultural innovation, entrepreneurship, engineering, business, art and technology.”

As Brian Kelly, editor and chief content officer of U.S. News & World Report wrote, “STEM is increasingly in everything, in most occupations.” In a culture where literally every application and job uses advanced algorithms and predictive programming, encouraging young people to take STEM careers seriously is a path towards increasing attainment in later years. At the same time, there exist gross inequities in access, guidance and educational opportunities for many youths. There needs to be a policy shift. Said Patterson, in a recent op-ed:

The disparities are not new; the lack of progress is not new.

Meanwhile, Patterson, also a faculty affiliate and lecturer at the Technology Entrepreneurship Center at the Grainger College of Engineering, has been busy. He received the Fiddler Fellowship in part for his work creating the Hip Hop Xpress Double Dutch Boom Bus! But Patterson’s work in local communities is broad and deep. He founded an engineering enrichment program called Street College, in affiliation with the Don Moyer Boys & Girls Club and Boyz2Men, a local mentoring program for Black boys, with partial funding from the Champaign County Mental Health Board.

Each summer, Patterson and his team run a week-long mentorship program at Douglass Park in Champaign. The team engages over a dozen 12–14-year-olds daily, starting with a brief lecture on the day’s topic that centers around engineering, art, technology and design. Students stay excited even when they work in the sweltering Midwest heat. The participants build boomboxes together, discussing circuitry, speaker output, power sources and Bluetooth receivers. The success of the program gave Patterson and his team an idea, one that could work, rain or shine.

The first iteration (pictured left) of the Hip Hop Xpress was an Airstream provided by the Grainger College of Engineering in 2010.

The Airstream was used as a prototype to develop the idea of a mobile research lab using hip hop culture as a foundation for engagement.

The Airstream was repurposed and three years later Patterson and his team secured a second trailer. They called it the Hip Hop Xpress “Beat Box.” The “B.E.A.T.S BOX” was a mobile recording studio that the team used to begin a discussion on sustainable energy, a topic in the Black community that he saw needed greater attention.

Then Patterson’s work began to get broader notice and the team received a large grant from the University of Illinois System’s Presidential Initiative to Celebrate the Impact of the Arts and Humanities. Thus, the Double Dutch Boom Bus, an innovative mobile learning unit, was born. It’s now in its third iteration.

Among its journeys, the Hip Hop Xpress has traveled to Springfield, garnering press attention and prompting a visit from the Lieutenant Governor, Juliana Stratton. Patterson’s work has received funding from a few other sources, but he’s the first to point out that the work remains incomplete. Structural changes must be made to give youth from low-resource communities continuous and regular project-based STEM support. Central to Patterson’s work is face-to-face mentorship and guidance. With this encouragement and hands-on problem-solving skills, educators can support the development of youth from culturally rich environments with the awareness of their own unique potential.

All we have to do is stop at a gas station, and people come up to us. I tell them, we party for science and technology.

Patterson’s work is not just limited to the Hip Hop Xpress. In March of 2020, Illinois’ schools closed and COVID-19 made gathering children in the tight confines of a bus impossible. He began to pivot to online learning and remote access, though the Xpress bus is still central to the work. Knowing his young audience well, Patterson keys into the rich musical history of the Black community.

During the summer of 2021, Patterson got a new and exciting project off the ground. Building on young people’s experience and knowledge of social media apps, Patterson built up a launch for a brand-new bus experience: the LovinU tour. LovinU is a full audio experience, featuring vocals and production from Patterson’s wide network of musicians, producers and technologists. And while live music is off-limits during a pandemic, music creation in the 21st century is an electronic process, and an opportunity to familiarize young people with the tools and the background to understand it is something the team is working to build on.

The work isn’t just about music, it’s about community, health and addressing gun violence. There were two main stories to tell: one, with COVID vaccines finally available, connecting with the Black community and becoming trusted partners in health-related topics enabled Patterson to discuss the importance of masking and getting vaccinated.

Second, with the George Floyd trial underway, discussions about gun violence and injustice were part of the outreach; check out this Tiktok produced by the same students. Critical to the program’s success and uptake by both the community and policy makers is its foundation in STEM entrepreneurship. His team demonstrates the process of invention with conceptualization, concept refinement, implementation and prototyping.

Patterson has an action-packed year planned ahead. By March 2022 the School of Architecture’s team, led by professor Kevin Erickson, will have completely remodeled the bus interior.

And then the bus gets ready to drive out to west to UCLA. There, they’ll help construct a Hip-Hop Xpress West in partnership with Safiya Umoja Noble, the author of Algorithms of Oppression.

As a Fiddler Fellow, Patterson hopes to further broaden his reach and work with teams at NCSA and Microsoft. Patterson will continue his RC car building program with design ideation and prototyping using Microsoft’s Azure cloud computing platform. The platform will support a virtual network among land-grant institutions, Historically Black Colleges and Universities and private colleges. Patterson is using his connections within Engineering Unleashed, a network of engineering schools around the country. Grainger College of Engineering is a partner in the consortium.

As Co-Director along with Ruby Mendenhall, PhD, Patterson plans to continue building out the STEM ILLINOIS Communiversity Center space.

The Communiversity Center serves as a collaborative space for faculty, students, academic partners, and community-based organizations to come together to build projects that meet the opportunities and grand challenges in their community. Pictured right is the lab space at the communiversity center filled with RC cars being used to build an engineering awareness and enrichment program called ONTRACK. Pastor Willie Comer is the development partner.

Patterson and the Hip Hop Xpress team was awarded two grants with Professor Lav Varshney from the Grainger College of Engineering around AI and music co-creation. Additionally, STEAM Genius was awarded funding from the City of Champaign as a partner in their Community Gun Violence Reduction Blueprint. The City of Urbana also awarded funding to STEAM Genius to implement the LovinU Tour 2022 this summer.

NCSA is proud to have Patterson as a Fiddler Fellow and is excited to see what the future holds for the Hip-Hop Xpress, its collaborators and its talented, hard-working students. For information on supporting Patterson’s efforts, visit www.steamgenius.org.