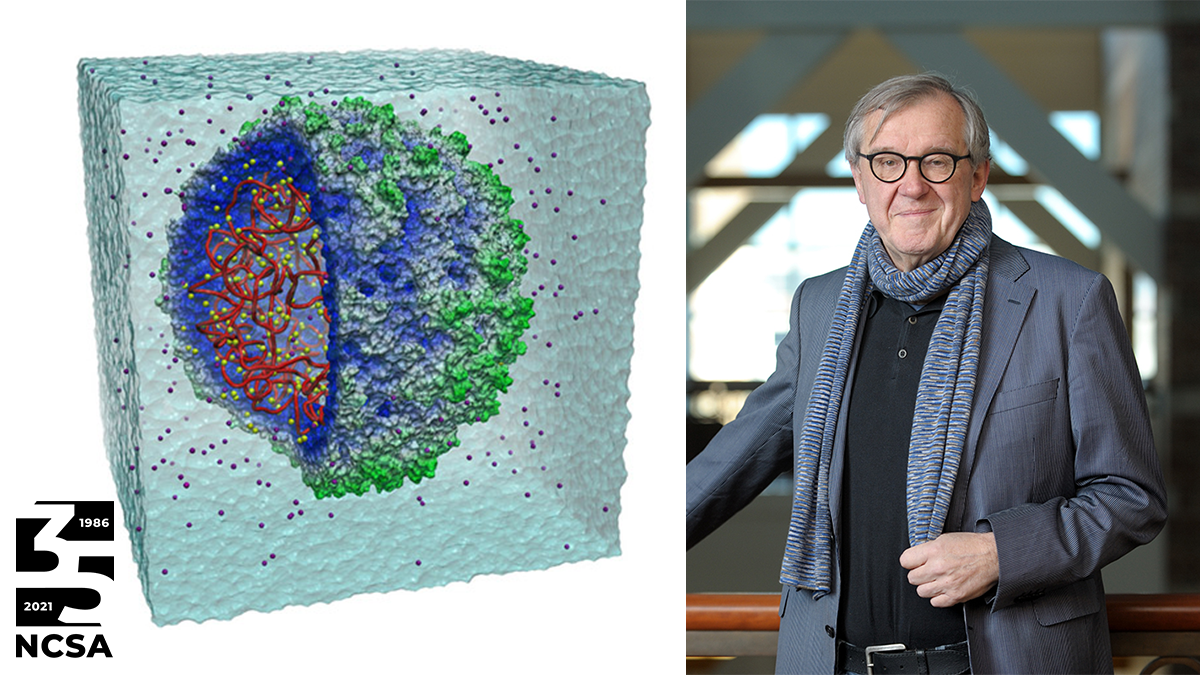 It’s a simple little virus—so simple that biologists often refer to it as a “particle” rather than organism, so small and primitive that it can only proliferate in a cell that’s already been hijacked by another virus. But a recent simulation of the satellite tobacco mosaic virus is also a striking first. There’s never been a computer simulation of an entire life form at atomic detail. Until now.

A report on the work by Beckman Institute’s Klaus Schulten and his collaborators at the University of Illinois Urbana-Champaign and the University of California Irvine appears in the March edition of Structure. It relied on the shared-memory SGI Altix supercomputer at NCSA.

Previously, all-atom molecular dynamics simulations on such a large structure have been infeasible. As a result, researchers often look at only part of a symmetric virus and use symmetric boundary conditions. Or they might simulate smaller portions of the virus or simulate the entire virus at a much coarser resolution.

The simulations of the satellite tobacco mosaic virus involved as many as one million atoms and simulation times of more than 50 nanoseconds. This required massive amounts of computing time—35 processor years. And it required a modern, scalable molecular dynamics code—NAMD, which Schulten and his team have been developing for years.

“This is on the highest end of what is feasible today,” says Schulten. “The approach is something that we learned from engineers: Reverse engineer the subjects you’re interested in and test fly them in the computer to see if they work in silico the way they do in vivo. Naturally, deeper understanding of the mechanistic properties of other, more complicated viruses will eventually contribute to public health and medicine.”

The simulations allow the research team to compare the behavior of the full virus and will help scientists determine what factors are important to the virus’ structural integrity and how those factors might influence the assembly of the virus inside host cells.