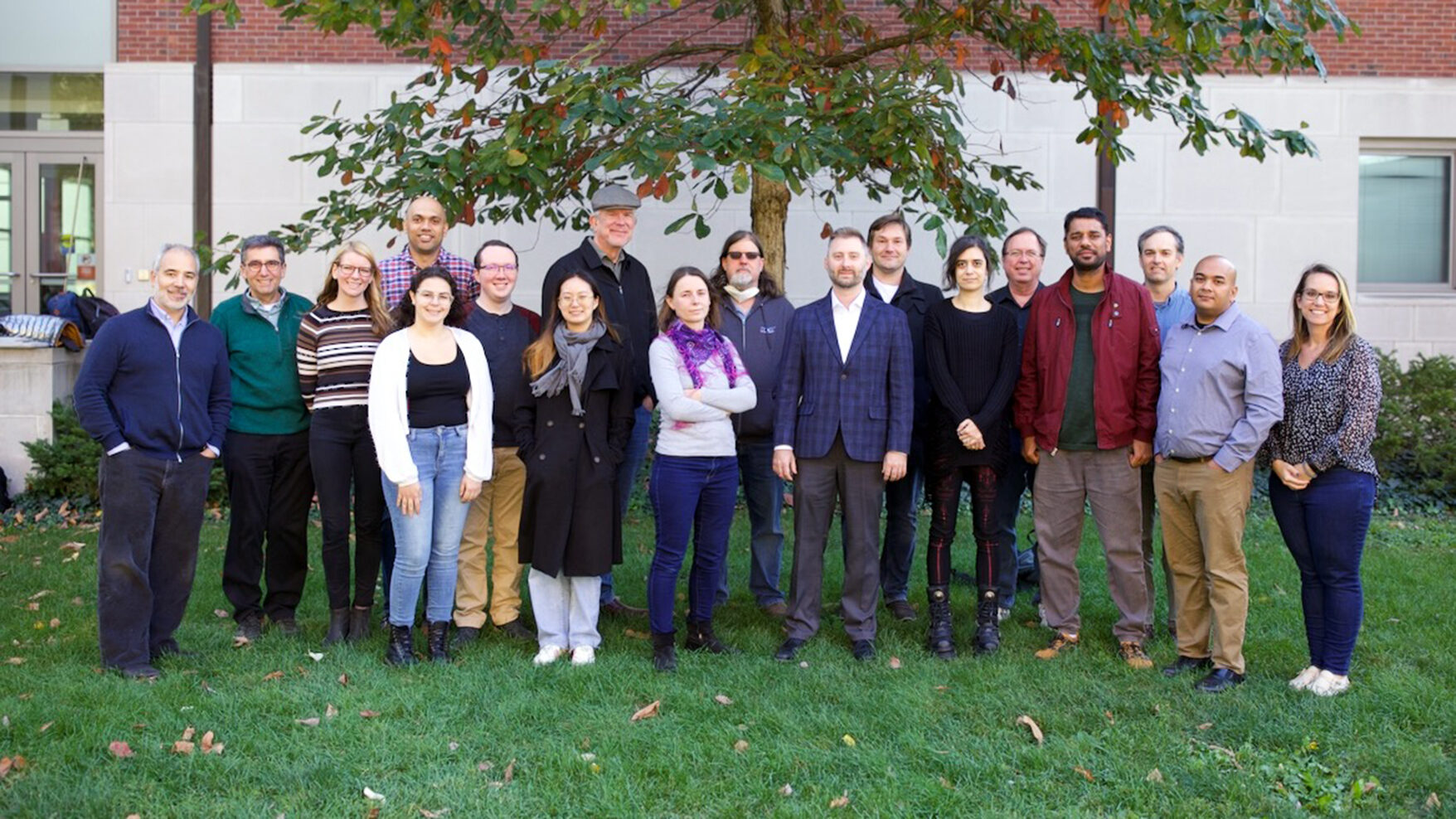 This year's CAPS Fellows and the ASPO Team

The University of Illinois sees many bright minds each year. This year, NCSA’s Astrophysical Sciences Project Office (ASPO) is pleased to announce seven new fellows are joining the Center for AstroPhysical Surveys (CAPS) team. These seven fellows represent the best and the brightest and their research speaks for itself. Meet the 2022–23 CAPS Fellows:

Raghunathan is originally from India and received his Ph.D. from the University of Chile in 2016. His research focused on primordial gravitational waves. These are traces from the birth of the universe and can be observed in the cosmic microwave background. After receiving his Ph.D., he joined the South Pole Telescope (SPT) where his research focused on gravitational lensing of the CMB. Using this SPT data, Raghunathan led the first detection of the polarised CMB lensing by galaxy clusters.

His current research focuses on understanding the physics of reionization, the nature of dark energy and neutrinos using the Sunyaev–Zeldovich effect and gravitational lensing of the cosmic microwave background (CMB). He’ll be using the data from the SPT in this research. He also leads the galaxy cluster analysis working group of the CMB-S4 experiment.

Trendafilova began her education at Texas A&M University. She earned two undergraduate degrees, in Physics and Mathematics, along with a minor in German. She received her Ph.D. at the University of Texas Austin in high energy physics, with a research emphasis on dark matter. She followed that up with a post-doc at Southern Methodist University in Dallas, before joining us at UIUC.

Her current research interest converges at the intersection of Beyond Standard Model physics, cosmology and astrophysics. She works on constraining BSM physics via observations, with a focus on data-driven cosmology and CMB science. She is a member of the CMB-S4 collaboration and has contributed to the development and public releases of the CLASS_delens and FisherLens delensing and forecasting codes.

Her work at UIUC focuses on finding distant galaxies in the cosmic microwave background data collected by the South Pole Telescope. She’ll be taking advantage of the CAPS fellowship to finalize her work cataloging objects from three years of data and will eventually travel to the South Pole to aid in the operations of the telescope there.

Phadke hails from Mumbai where he finished up his undergraduate degree in Physical Sciences, with Astronomy and Astrophysics as a major, at the Indian Institute of Space Science and Technology, Thiruvananthapuram, India in 2012. He joined the Ph.D. program at the Department of Astronomy at UIUC in Fall 2016.

His work focuses on following up high-redshift, gravitationally lensed, dusty star-forming galaxies and transient sources discovered from the SPT. During his fellowship, he’ll be working with data from the James Webb Space Telescope, focusing on JWST data reduction and analysis of high-redshift lensed galaxies discovered from the SPT-SZ survey. He’s part of three JWST cycle 1 projects and is the principal investigator on one of them.

Stone studied at Stony Brook University, where he obtained Bachelor’s degrees in both Astronomy and Physics. He’s currently a second-year Ph.D. graduate student in the Department of Astronomy at UIUC.

His research focuses on the intrinsic variability of active galactic nuclei and their supermassive black holes display, mainly in the optical wavelengths. During the fellowship period, Zach hopes to continue with this line of research, focusing on applying different physical and statistical models to observed AGN data to better explain the cause of their variability. Zach is excited to be accepted as a CAPS fellow and looking forward to becoming part of the community and continuing his research.

Wasserman received her Bachelor of Science in Physics and Astronomy from the University of Rochester in 2021. There, she performed research with the Dark Energy Spectroscopic Instrument, a survey of over 35 million galactic spectra, using machine learning to discover serendipitous supernovae.

Now a Ph.D. student in the astronomy department at UIUC, she works with Professor Gautham Narayan on the Legacy Survey of Space and Time (LSST) and the Young Supernova Experiment (YSE). Over the next year, Amanda will be preparing a pipeline for selecting transient events that merit spectroscopic follow-up.

Wu is a second-year astronomy graduate student in professor Yue Shen’s research group. She received her Bachelor’s degree in Astronomy from Xiamen University, China in 2021. Her research focuses on multi-wavelength studies of black hole binaries and quasars, and the co-evolution of supermassive black holes and their host galaxies during cosmic evolution.

As a CAPS fellow,  she’ll establish the framework of spectral analysis of massive spectroscopic data sets such as SDSS and carry out additional science analyses to utilize these derived spectral properties to explore quasar physics and phenomenology.

I’m thrilled by the current group of CAPS fellows. We are bringing together a dynamic and diverse team of early career astrophysicists to tackle problems ranging from the origin of the universe to the nearby dynamic universe, using the most powerful instruments ever built, including the Vera Rubin Observatory and the James Webb Space Observatory. I couldn’t be more proud of the Center, or more excited to work along side these brilliant scientists.

Joaquin Viera, Director of the Center for Astrophysical Surveys

CAPS is excited to welcome this year’s fellows and looks forward to celebrating their accomplishments in the years to come.