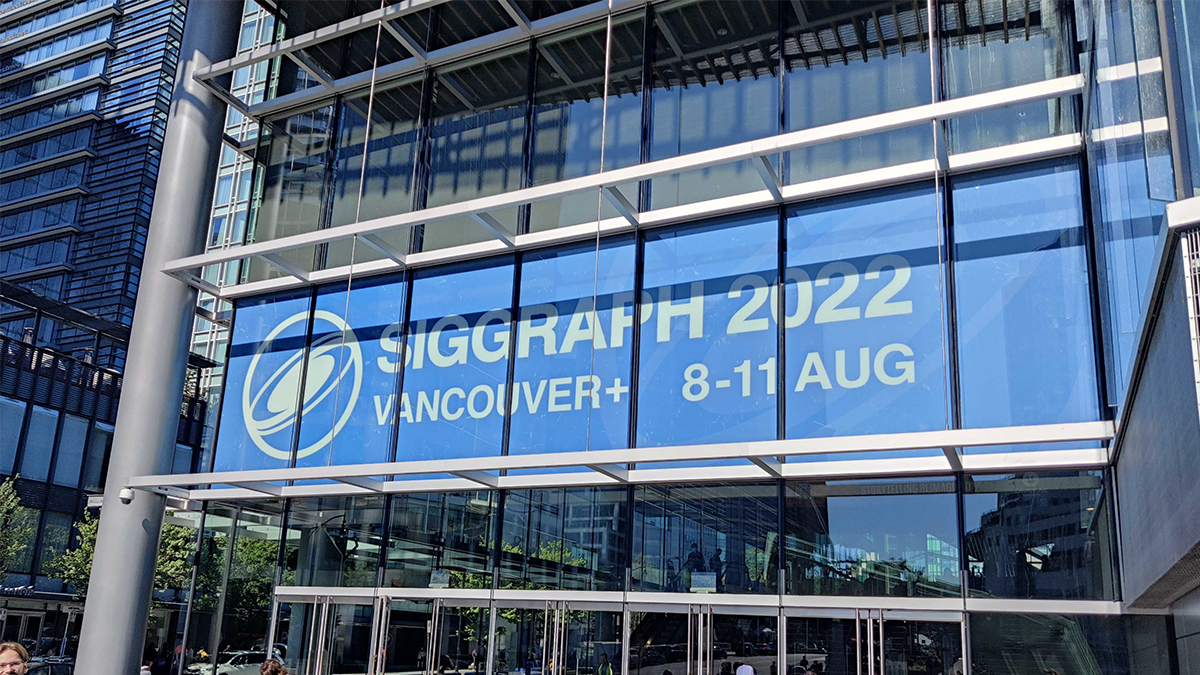 Humans rely heavily on sight to comprehend the world around them. Whether driving a car or building an engine to send a rocket into space, visualization and graphics are a core part of how humans learn.

The ACM SIGGRAPH conference shows just how important visualizations and computer graphics are to explaining and expanding upon complex ideas.

This conference is a significant hub for innovations in computer graphics and interactive techniques for visualization. Major players in the visual effects field, such as Pixar and Disney, often have a lot of representation there. And NCSA’s Advanced Visualization Laboratory has a long history of making its mark.

Kalina Borkiewicz, director of the NCSA Visualization Program Office and AVL lead, was gracious enough to sit down with us to discuss why NCSA’s involvement at SIGGRAPH over the years has been so valuable to our organization’s future in visualization and computer graphics.

Advanced computer graphics gives you the opportunity to not just do visualization for scientists and keep it in research and academia. It also lets you have a broader reach and make an impact on a wider audience.

What Visualization Can Do

AVL is an essential piece of NCSA’s research portfolio. Performing everything from data translation and import to rendering and compositing, It has deep roots in computer graphics.

As such, the SIGGRAPH conference is a time to showcase all the hard work performed by AVL’s talented team. Borkiewicz shared that AVL excitedly taught a course on evidence-based scientific communication that helps underscore visualization’s role in communicating complicated scientific ideas in an accurate and understandable way.

“In this course, we’re really focusing on how to make impactful visualizations, so not just focusing on how to turn numbers into images and the design and tech aspect, but also the social science side of things,” says Borkiewicz. “How do you test your visualizations? How do you evaluate them? How do you loop in audiences and scientists to iterate and involve them in the process to ensure that you’re doing everything accurately and having the broadest possible impact?”

But beyond teaching classes, AVL hopes to inspire with the Atlas of a Changing Earth – their award-winning documentary featured in SIGGRAPH’s prestigious Electronic Theater. By visualizing three types of data – Artic elevation models, global climate simulation models, and African tree survey data – the team behind Atlas of a Changing Earth hope to make the various concerns of the climate crisis easier to comprehend for the average person.

“There’s a lot of documentaries about climate change,” says Borkiewicz. “What makes this one unique is that it focuses on how technology – including modern computational science, supercomputing and geospatial technology — are helping us understand and try to solve some of these problems.”

Borkiewicz continues: “The film and our visualizations feature a lot of work performed on Blue Waters, the supercomputer that was at the University of Illinois for a long time. We’re not just saying ‘climate change is horrible’ – although it is. The focus in the film is really on the technology and what scientists are doing, such as mapping the Earth in high resolution and incredible detail to track all of the changes going on and then running computational models to project what will happen in the future.“

The climate crisis is a vast problem that will affect every human on Earth, and such a dire consequence can make the topic hard to discuss. As Borkiewicz points out, visualization can help us explain these problems and their solutions without overwhelming the public.

Toward an Inclusive Community

Of course, SIGGRAPH is so much more than just a conference. It’s a melding of minds, a conglomeration of passionate people coming together to share their love for computer graphics. As such, it’s an opportunity to celebrate inclusion and diversity.

“Diversity, equity, and inclusion are all things that I’m very passionate about,” says Borkiewicz. “Specifically, as a woman in tech myself, I’ve always been a minority. All the meetings I’m in and the school I attended have always been mostly men. And within the computer graphics community that’s a subset of the larger computer community, which is very male-focused. All of the same problems that are in that larger community also exist within computer graphics.”

To discuss this problem, Borkiewicz is part of a Women of SIGGRAPH Conversations committee. They virtually host multiple events throughout the year. The group held its first in-person event at this SIGGRAPH 2022, a lunch mixer, which proved to be a great networking opportunity for women in tech.

“There was also a presentation component,” says Borkiewicz. “We featured Danielle Feinberg – an artist, a scientist and a technologist; a renaissance woman who’s a visual effects supervisor at Pixar. She’s the first woman to hold that title in 20 years at Pixar. So, we honored her with a ‘Breaker of the Glass Ceiling’ award at this event.”

Borkiewicz espouses teambuilding and comradery as major draws for the SIGGRAPH conference – and she’s not alone. For 50 years, SIGGRAPH has been exciting the world and bringing about innovations within computer graphics.

While being new to the conference may seem intimidating, Borkiewicz emphasizes that SIGGRAPH can be a welcoming place for those who want to learn. She hopes more recognition of the student volunteers’ program will help bring new blood into the conference.

“Something that I wasn’t aware of when I was a student is that the conference has a Student Volunteers’ program where students can volunteer to help with the conference,” says Borkiewicz. “Tasks can be easy, little things like checking badges and directing people to different parts of the conference. And in exchange for volunteering their time, they get to attend the conference. It’s a really great opportunity and I’ve since sent a couple of my student interns through that channel. I didn’t know about it myself and couldn’t take advantage of it then, but I absolutely would have because it’s a great resource.”