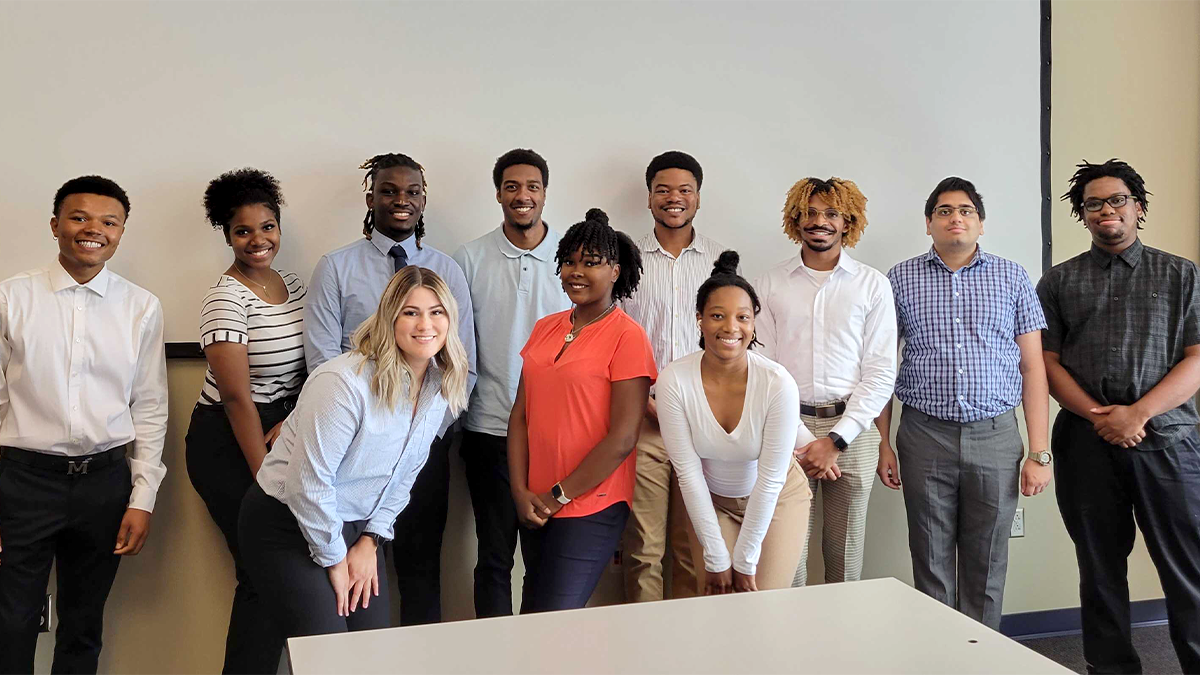 Students in the CDA REU program at this year’s AIFARMS conference.

What do tiny robots, baby formula, AI, machine learning and the world’s food supply have in common? You might be surprised at how they’re all interconnected. The students involved in the Research Experience for Undergraduates (REU) program know well how agriculture science can help research in innovative ways.

This summer, the Center for Digital Agriculture, AIFARMS, and CROPPS co-hosted the eight-week (June 13 – August 5, 2022) on-site REU summer program. The program pairs promising students with mentors and puts them on projects on the leading edge of technology. The students not only get valuable experience on real-world projects solving real-world problems, but they also get paid while they work, giving the program added value and incentives to attract some of the best agriculture students in the world to apply. The twelve students who were a part of the REU program this year came from Tuskegee University, Langston University and the University of Illinois.

Christina Tucker, Assistant Director of Education for the Center for Digital Agriculture and AIFARMS, speaks highly of the program and was glad to be a part of it this year.

UIUC is in the center of a booming AG tech hub in the United States. The REU program aims to give students exposure to some of the up-and-coming Ag technology and research as well as exposure to career paths they may have not previously considered.

At the conclusion of the REU summer program, several projects were presented this year at the AIFARMS Conference with topics ranging from using robots to safely study crops for nitrogen levels to studying the behavior of goats to determine if they are ready for breeding.

This valuable internship opportunity was sponsored by CDA, AIFRAMS and CROPPS. Industry partners Microsoft and Corteva, who specifically sought out bright young students from underrepresented communities, also helped sponsor the REU program this year. The group of students who participated was exceptionally diverse and included students from two historically black universities.

We might perhaps imagine tofu or edamame when we think of soybeans, but soybeans play an integral role in the world food supply. A 60-pound bushel of processed soybean produces about 47 pounds of soybean meal, which is by and large turned into protein-rich food for livestock. Ninety-seven percent of soybean meal used in the U.S. is for poultry and livestock feed. The remarkable soybean is used in breakfast cereals and bars to increase the protein in these foods. If you’re using vegetable oil in your kitchen, it may very likely have soybean oil in it.

That’s why protecting soybean production is so important, something Jelena Herriott knows well. Herriott worked on a project with a technology called Free-Air Concentration Enrichment (FACE). Soybeans are highly sensitive crops, especially when it comes to ozone and CO2 levels. When these levels rise, soybean crops suffer. As Jelena writes in her abstract, both ozone and CO2 levels have risen drastically since the industrial revolution, which negatively impacts the growth of soybeans. Jelena is part of a group that has been working on a project to figure out if there are treatments that could alleviate some of the issues CO2 and ozone have on these important crops. This is where the FACE technology comes in.

FACE can simulate increased ozone and CO2 levels by releasing these gasses over the crops. At the University of Illinois Urbana-Champaign, a team of researchers has compiled over 20 years of data using FACE. Jelena’s contribution to the project involves analyzing this data to determine trends and treatments to improve the growing conditions for soybeans and stabilize the yield of this essential world food source.

Agriculture science isn’t just about farming. Sponsored by Microsoft, Miles Thurman was part of a larger project studying piglets. The project was designed to solve a problem with infant formula for human babies. There’s a condition that afflicts some infants where their stomachs become inflamed when fed formula. By utilizing videos of piglets and an open-source behavioral labeling tool called BORIS (Behavioral Observation Research Interactive Software), researchers have been able to use the piglets to see if an amino acid called TBCD would alleviate the symptoms that occur in infants affected by this formula-induced inflammation. Mile’s contribution to the project was working on an ethogram that would catalog various behaviors in his subjects, the piglets. Carefully observing these videos allowed Miles to look for behaviors in the piglets that indicated they were feeling ill. The remarkable ways in which agricultural science can aid in sister STEM fields are as diverse as the students who took part in the REU program.

Robots that Collect Data from Crops

Darius Tubbs project, sponsored by Corteva, is another good example of both the bright minds REU attracts to the program, and the types of research these students work on. In Tubbs’ project abstract, he writes:

“The advancement of agriculture is tied directly to the advancement of our civilization. The growth of crops is important to the global landscapes as they provide resources that can enrich lives. They offer a variety in human diets, as well as provide a major component of international exports.”

Tubbs goes on to explain the difficulties in gathering data on crops. Everything from the size of the farms, the condition of the land, the workforce required to gather such data, and the risk of damaging the specimens comes into play when designing ways to carefully study crops. Tubbs’ work with EarthSense, a company that designs ultracompact robots for studying crops, has increased the utility of these robots by reducing the number of errors. He studies the way the robots move through the rows and analyzes that data to improve efficiency and performance. His work has greatly reduced the downtime of these robots due to crashing as they cross the uneven terrain of a crop field, allowing more robust research and data to be collected from these hard-working bots.

Now the next time you see a field full of crops, you’ll see more than just produce. You’ll see the many ways the student researchers in the REU program are improving our lives in the most unexpected ways.

More on REU students and their projects here