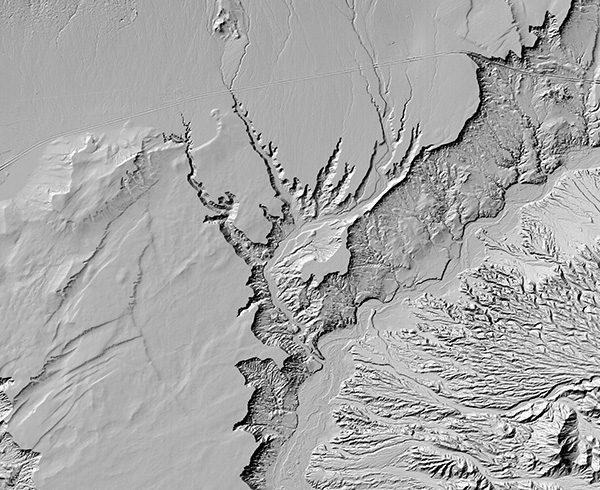 One of the earliest projects to ramp up after NCSA launched the Blue Waters supercomputer in 2013 was a project from the University of Minnesota’s Polar Geospatial Center. They wanted to make high-quality digital elevation models, or DEMs, for the polar ice. Their process of using stereo satellite imagery to make the DEMs worked, and soon the team was immersed in maps with two-meter resolution.

Then a call came from the White House Office of Science and Technology Policy. The United States would be chair of the Arctic Council from 2015–17. Would two years be enough time for PGC and collaborators to make these high-fidelity DEMs for the entire Arctic Circle region? And the race was on.

With the help of the Blue Waters team and collaborators at the Byrd Polar and Climate Research Center at The Ohio State University, PGC’s DEM production capabilities went from a small area, on-demand production to systematically process and create high-resolution stereo elevation mosaics of the entire Arctic region, catapulting the Arctic from the worst- to among the best-mapped regions on Earth. It also allowed precise detection of change over time, creating a new baseline for measuring the rapidly evolving landscape.

Next, the methods were applied to mapping Antarctica. By this time, the polar DEMs had sparked an idea: Working with the National Geospatial Intelligence Agency scientists began making these high-quality DEMs of the entire Earth. The first series of high-quality DEMs showing high-resolution, three-dimensional topographic maps of select areas of Earth were recently released.

NASA’s Commercial Smallsat Data Acquisition (CSDA) program and the Polar Geospatial Center at the University of Minnesota recently released new, high-resolution, three-dimensional topographic maps of select areas of Earth. The digital elevation models, or DEMs, are the first data released as part of the EarthDEM Project, a collaboration between PGC, the Byrd Polar Research Center at The Ohio State University, NCSA, and government partners to produce high-resolution terrain maps for temperate and tropic regions.

The Blue Waters sustained-petascale system is one of the most powerful supercomputers in the world. Located at the University of Illinois Urbana-Champaign, it can complete more than one quadrillion calculations per second on a sustained basis and more than 13 times that at peak speed. Blue Waters is a joint effort of U of I and its National Center for Supercomputing Applications. NCSA manages the Blue Waters project and provides expertise to help scientists and engineers take full advantage of the system for their research. Blue Waters is supported by the National Science Foundation, the State of Illinois, and as of December 2019, the National Geospatial Intelligence Agency.